The sermon after the reading

The sermon after my reading was not on murder; but something more interesting: the Sabbath.

The  picture gives it away; the Sabbath is the pivot in the 10 Commandments between knowing God, and behaving in consistency with knowing God; behaving in a God-like, or God reflective manner, congruently with us being in Gods image (Genesis 1:26, where he defines our relationship with the rest of the creation, and it is not for worship, but for 'ruling') : that is, made to be God-like, and in relationship with God. 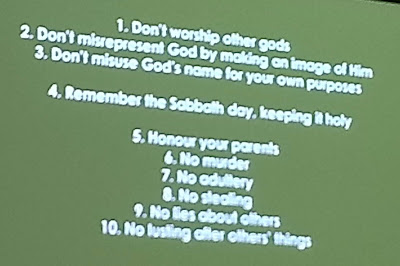 The first three are about God and our understanding of and relationship to him.

The fourth is part of our being like God. When God finished creating, he 'rested'. As Genesis 2 shows us, as the account zooms into man's creation detail, the resting is for relationship: God walks in the Garden seeking his creatures. Genesis 3:8. Alas, broken!

Note, it is 'you shall not murder', and not 'you shall not kill'. Big difference, particularly in the light of Romans 13:4.
No comments: Links to this post

The let people down project.

When I was in high school, the school Christian club was great fun. I was on the committee when in senior years, and participated in conducting meetings.

What we didn't do was equip each other to defend our faith, to understand and deal with the questions, to develop rhetorical skills and understand how to debate by questioning, for the serious detractors, and how to flick off the fools.

Still the same, based on what my younger friends tell me.

Apart from understanding the issues that interest young people and their intersection with biblical and faith objectives, the opportunity needs to be taken to give Christian young people knowledge about such as:

The Bible doesn't have verses

I was pleased to come across a talk by Greg Koukl (he called it an hour of "mentoring"; being Australian, I'd call it an hour of talk....Americans and their terminology! One mentors another in a dyadic relationship, it's not a 1:10,000 thing) where he pointed out that the Bible doesn't have verses.

Good call, Greg. It doesn't. At least, the Holy Spirit didn't inspire 'verses'. They are just a handy reference system applied to the text retrospectively, by a fellow with the bright idea in the 1550s. Good idea too. We have systems of references in legal documents, legislation, textbooks. In some legal documents, you will even find every line of text numbered, so a reference system is a useful feature for the Bible.

But the point is, the verse and chapter divisions mean nothing to the meaning of the text. Some people, even some Christians, seem to think that the Bible is a collection of 'verses', of sayings just strung together. It is not. Its a collection of literature: regular literature as in history, narrative, poetry, correspondence, instructions, declamations, (there's even some humour, 'rule the fish' sticking in my mind for that one)...so you just don't go verse harvesting to suit your immediate need.

As Peter says,  there is no 'private interpretation' of Scripture, Stanley Fish's reader-response theory is out the door as far as the Scripture is concerned (indeed, as far as any text is concerned).
No comments: Links to this post

Email ThisBlogThis!Share to TwitterShare to FacebookShare to Pinterest
Labels: Bible

Do you 'build theology'?

Build your theology on the Bible, or don't bother.
No comments: Links to this post

One of Craig's 5 reasons from https://www.reasonablefaith.org

God makes sense of the origin of the universe

Have you ever asked yourself where the universe came from? Why everything exists instead of just nothing? Typically atheists have said the universe is just eternal, and that's all.
But surely this is unreasonable. Just think about it a minute. If the universe never had a beginning, that means that the number of past events in the history of the universe is infinite. But mathematicians recognize that the existence of an actually infinite number of things leads to self-contradictions.
For example, what is infinity minus infinity? Well, mathematically, you get self-contradictory answers. This shows that infinity is just an idea in your mind, not something that exists in reality. David Hilbert, perhaps the greatest mathematician of the twentieth century, states, the infinite is nowhere to be found in reality. It neither exists in nature nor provides a legitimate basis for rational thought. The role that remains for the infinite to play is solely that of an idea. [1]
But that entails that since past events are not just ideas, but are real, the number of past events must be finite. Therefore, the series of past events can't go back forever; rather the universe must have begun to exist.
This conclusion has been confirmed by remarkable discoveries in astronomy and astrophysics.
In one of the most startling developments of modern science, we now have pretty strong evidence that the universe is not eternal in the past but had an absolute beginning about 13 billion years ago in a cataclysmic event known as the Big Bang. What makes the Big Bang so startling is that it represents the origin of the universe from literally nothing. For all matter and energy, even physical space and time themselves, came into being at the Big Bang.
As the physicist P. C. W. Davies explains, "the coming into being of the universe, as discussed in modern science . . . is not just a matter of imposing some sort of organization . . . upon a previous incoherent state, but literally the coming-into-being of all physical things from nothing." [2]
Of course, alternative theories have been crafted over the years to try to avoid this absolute beginning, but none of these theories has commended itself to the scientific community as more plausible than the Big Bang theory.
In fact, in 2003 Arvind Borde, Alan Guth, and Alexander Vilenkin were able to prove that any universe which is, on average, in a state of cosmic expansion cannot be eternal in the past but must have an absolute beginning. Vilenkin pulls no punches:
It is said that an argument is what convinces reasonable men and a proof is what it takes to convince even an unreasonable man. With the proof now made, cosmologists can no longer hide behind the possibility of a past-eternal universe. There is no escape, they have to face the problem of a cosmic beginning. [3]
That problem was nicely captured by Anthony Kenny of Oxford University. He writes, "A proponent of the Big Bang theory, at least if he is an atheist, must believe that the universe came from nothing and by nothing." [4]
But surely that doesn't make sense!
Out of nothing, nothing comes. So why does the universe exist instead of just nothing? Where did it come from? There must have been a cause which brought the universe into being.
We can summarize our argument thus far as follows:
Given the truth of the two premises, the conclusion necessarily follows.
From the very nature of the case, this cause must be an uncaused, changeless, timeless, and immaterial being which created the universe. It must be uncaused because we've seen that there cannot be an infinite regress of causes. It must be timeless and therefore changeless—at least without the universe—because it created time. Because it also created space, it must transcend space as well and therefore be immaterial, not physical.
Moreover, I would argue, it must also be personal. For how else could a timeless cause give rise to a temporal effect like the universe? If the cause were a mechanically operating set of necessary and sufficient conditions, then the cause could never exist without the effect.
For example, the cause of water's freezing is the temperature's being below 0˚ Centigrade. If the temperature were below 0˚ from eternity past, then any water that was around would be frozen from eternity. It would be impossible for the water to begin to freeze just a finite time ago. So if the cause is permanently present, then the effect should be permanently present as well. The only way for the cause to be timeless and the effect to begin in time is for the cause to be a personal agent who freely chooses to create an effect in time without any prior determining conditions.
For example, a man sitting from eternity could freely will to stand up. Thus, we are brought, not merely to a transcendent cause of the universe, but to its personal Creator.
Isn't it incredible that the big bang theory thus confirms what the Christian theist has always believed: that in the beginning God created the universe?
Now I put it to you: which makes more sense: that the Christian theist is right or that the universe popped into being uncaused out of nothing? I, at least, have no trouble assessing these alternatives!
No comments: Links to this post

Progressive is not always progress

Progressive Christianity? Not.
No comments: Links to this post