The lector at church this morning bemoaned the 'social' justice implications of the shorter life expectancy of aboriginal Australians than non-aboriginals.
Here's the reason, then. Nothing to do with justice, social or otherwise (or maybe it is...do silly things, justice will repay with poor outcomes, automatically). 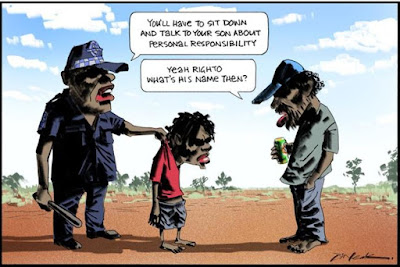 But its not just Bill. Jacinta Price is on record for pointing to Aboriginal culture as the root of the appalling violence faced by aboriginal women and children.
Other problems of a self-inflicted nature include: poor diet (thus diabetes and early death), excessive alcohol (FAS, abused children, early death), illicit drug use (early death), lack of personal responsiblity, agency and engagement (mental health risks) leading to above habits and...you got it...early death.

All that on top of the nepotistic mis-management of the $50 billion of public money given to Aboriginal support over a few decades. Mostly wasted!

Happy to help, but as Jacinta points out, we know which court the ball is in.

Email ThisBlogThis!Share to TwitterShare to FacebookShare to Pinterest
Labels: Justice