What God cannot do!

There are things that God cannot do!

He cannot make married bachelors, for instance, or square circles. It's not a matter of power, its a matter of the logical law of the excluded middle: a proposition cannot be both true and false in the same relation at the same time.

Thus, analytically, the proposition about married bachelors has no meaning, so there is nothing proposed for God to do.

The classic statement of the so-called 'problem of evil' falls foul of this law.

The classic formulation is: 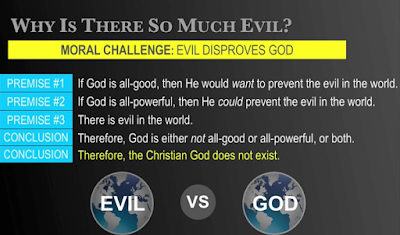 This formulation is tendentiously enthymematic on which premise 2 rests.

It hides from glare the premise that 'evil' has an ontology. That is, that there is this thing called 'evil' that exists. This then sets up for premise 2 and so on.

Evil certainly occurs, but it is the negation of good, broadly speaking.

Good is that which is consistent with and reflective of God's nature (summarised in 1 John 4:8 -  God is love).

Now, can God make a world where creatures in his image cannot chose to exercise the capacities of that image? The married bachelor problem again.

The point is, God could have made creatures without the capacity to make relationally significant choices, but those creatures would not have been able to enjoy God for ever (this is reflected in our worship of God). The creatures would be no more than pet dogs. Dogs 'enjoy', but they don't know that they enjoy.

Evil is a state of being that results from the repudiation of relationship wth God. Genesis 3:8 is its result.

But, what the questioner needs to tease out is why they can detect this state of affairs called 'evil'. It's not just that they are saying that Christian faith is flawed, it's that they can 'see' a flaw, and this flaw is more than something of the 'I don't like mustard icecream' variety. It is, they would assert, a real flaw.

(Acknowledgement to my son who pointed this out to me.)

Email ThisBlogThis!Share to TwitterShare to FacebookShare to Pinterest
Labels: Evil