As I grew up in church, we had communion every Sunday morning, with an 'after-meeting' of the evening after the 'gospel' service, for those who were not able to attend in the morning.

The communion service consisted of an over-stiffly performed non-liturgical liturgy about the last supper, wafers of bread were broken (unleavened, for some reason), and fake wine was distributed by ushers moving as 'worshipfully' (means, slowly, stiffly and quietly) as they could.

After many years of this, and after moving to the heart of Sydney, I attended a 'high' and very liturgical Anglican church. If you're a frequent reader of this blog, you will know all about that. Now, if one is going to do ceremony, that is how it is done.

The whole liturgy of the communion was a wonderful stately opera (in a good way) of form, content, gracefulness.

At least the Anglo-Baptists use a liturgy, as emasculated of splendour as they can muster, while the real Baptists experiment.

One experiment I liked was having a number of communion stations around the gathering hall. We lined up at our choice of servers. We were given the elements, a brief blessing was said, and prayer if requested.

Still not a meal, but more meaningful and moving in a simpler and more accessible manner than the high guys.

I toss up whether it is a meal: where we all break bread, and eat together. Paul hints it either way, so I'm not sure.

But now its none of the above.

Due to everything (the Covid-19 public health debacle, ease of assembly, simplicity of logistics and speed of delivery) the communion elements come in a small plastic individual serve of sealed wafer the size of an old half-penny coin, beneath which is a sealed mouthful of fake wine. 'Individual' gives the game away. Individual is the very antithesis of 'Communion'.

It does, I suppose, but it is risible in a ridiculous way. Like the aircraft meal: it's formally a meal, but not as you'd prefer it to be. 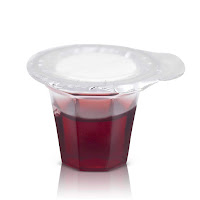 Email ThisBlogThis!Share to TwitterShare to FacebookShare to Pinterest
Labels: Communion