Christ Church St Lawrence was a church from another, better planet, I thought. Its 'sister' up the hill at Queen's Square, St James, was ambiguously on both CCSL's planet and on earth! What I mean is, it had some of the glorious connections with deep tradition that CCSL did, but seemed more comfortable with the contemporary practice of Christianity. I loved them both and formed good friendships at both.
One highlight of my time at these two parishes was a 'pilgrimage' that was organised to Bathurst cathedral. We hired a steam train to take us there, which was a bit of a novelty. Peter Hughes was rector, and I was blessed by the counsel of one of the curates, name escapes me.

The building was usually more populated than the  picture. And overflowing at Easter and Christmas. I still go sometimes to the midnight eucharist on Christmas Eve for its great joy. 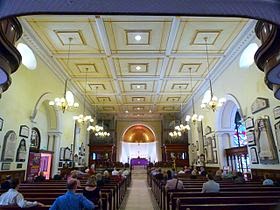 More frequently I attend lunch time concerts through the week; particularly if the organ is being played. Not only do I love the music and its associations with my time there, but I like reflecting on the Christian lives represented in the various plaques and monuments on its walls. Some quite sad.

For a feel for the music that we were blessed with from time to time, here's a rehearsal.