At our evening service, the president changed our prayer routine. Instead of one person praying he invited members of the congregation to contribute a short prayer as they wanted. Good idea, I thought, as long as it didn't go for too long*.

He introduced the segment with Ecclesiastes 5:1-3. Aptly to encourage short prayers (I was reminded of Nehemiah's quick prayer). He was also wise enough to cap the session after a good handful of contributions. I have been in meetings where such sessions went on and on: tedious for all and detracting from the overall meeting.

*On the topic of too long, I read of a prayer meeting in Ackroyd's Civil War that went for about 8 hours, with one of the Puritan pray-ers praying for 2 hours! Closer to home, I attended Petersham Baptist church in Sydney many moons ago where the prayer went for over 30 minutes. Too much. God is not honoured by many words, methinks.
No comments:

I completed an example of the church life survey that I prepared earlier [link]. Now comes the analysis. 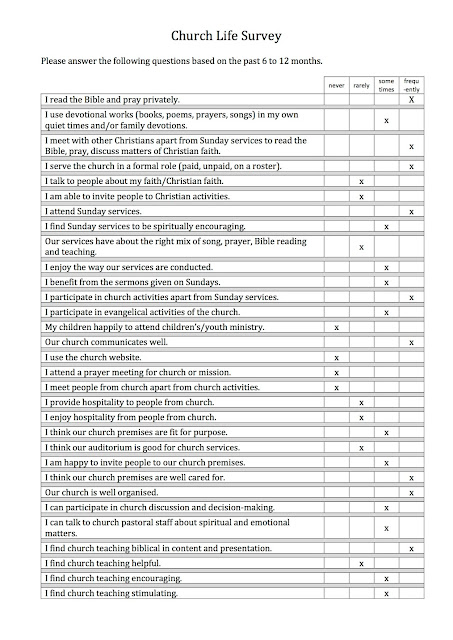 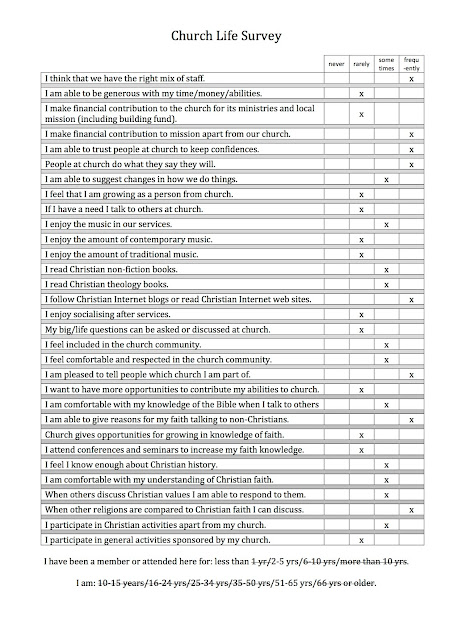 I need to do more work to establish the domains of church capability, Christian engagement, church engagement, church inclusiveness (broadly these are the categories I had in mind), then they can be analysed. The response scale is in the form of a Likert scale, so its probably OK to assume that the scale is an equal interval scale for practical purposes (if not, and you believe that the ordered discrete variables in fact are discrete approximations of underlying variables with "normal", continuous distributions, you might want to have a look at Stas Kolenikov's Stata command -polychoric-: www.cpc.unc.edu/measure/publications/pdf/wp-04-85.pdf. The command enables you to estimate polychoric correlation on your "Likert type variables" without assuming true interval scale measurements; this is probably theoretically neater).

However, this is maybe going too far for the typical church.

A simpler approach is to count up the number in each scale item for each question, then note the 'mode' (the item with the most scores), and the total number off mode. This alone should give an experienced minister the drift of congregational sentiment.

A little more sophisticated approach would look at the mode by age group and duration of membership. This could also throw up relationships between the Christian engagement, church engagement and church inclusiveness groups of questions.

While pecking around the Internet looking for lists of Christian books, I came across some good links to libraries:

Sorting through old papers today, I came across this, reminiscent of happy days (not the fire, but the church): 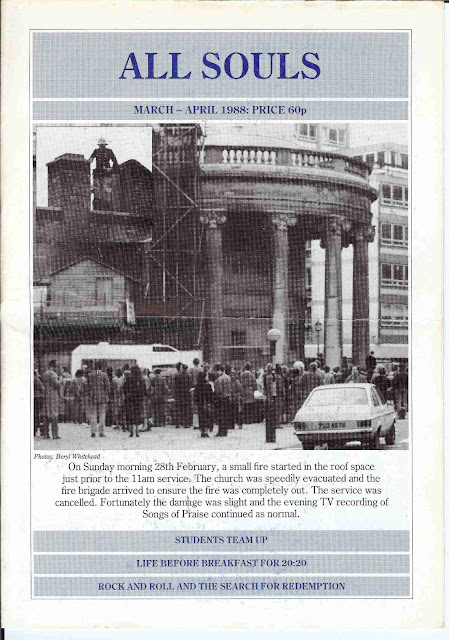 More to add to my list of 12 great Christian books.

In my previous list I had 8 books by 7 authors, so I need to add four more books:

The fact that these books come easily to mind suggest their significance in my reading:

Hans Kung: Does God Exist? and On Being Christian
Frederick Dale Bruner: A Theology of the Holy Spirit
Donald Crowe: Creation without Compromise

There, that's 4. I was also impressed with Carl Henry's God Revelation and Authority, and plan to re-read it...one day. I also have fond memories of  Helmut Thieleke's The Evangelical Faith (and plan to read Michael Bird's book of the similar name Evangelical Theology).

I know Kung has some aberrant ideas, but those books did fuel a lot of thought for me, and they were a breath of fresh air in the arid intellectual environment of the church I was in during my early 20s.

Email ThisBlogThis!Share to TwitterShare to FacebookShare to Pinterest
Labels: Books

I'm on to lists of books.

I've blogged on my top 12 (the first 7, anyway), and what other people think in general Christian books, but now here's the serious crowd: theology.

Christian Century's list of lists for the last 25 years

There's a Sunday School song that the child of one of my friend's sings...I think my kids also sang it years ago, called 'Jesus is the Boss'. Its appalling lyrics are linked.

Appalling? Why, doesn't it just delineate the lordship of Jesus is language that children understand?

Compare this line: "Jesus is the boss of the fishes in the sea"

God blessed them; and God said to them, “Be fruitful and multiply, and fill the earth, and subdue it; and rule over the fish of the sea and over the birds of the sky and over every living thing that moves on the earth."

At this point...the first line, the song gets it theology of creation dead wrong.

But 'boss'? What is this supposed to convey? How many parents come home effusive with praise for their boss? Not many, I daresay.

A boss is a person in a contractual employment relationship that is very much not personal at all, and bound all all sides by law as thick as a phone book (not that we see those too often these days).

Does a 'boss' say things like this: "How often I wanted to gather your children together, the way a hen gathers her chicks under her wings..." (Matthew 23:37)? Or anything like John 17?

It is a trite ditty more destructive than most trite ditties I've heard, and in its misleading with such potential to damage the faith of young ones.
No comments:

My own small contribution to the church life survey industry. Free to use and adapt. 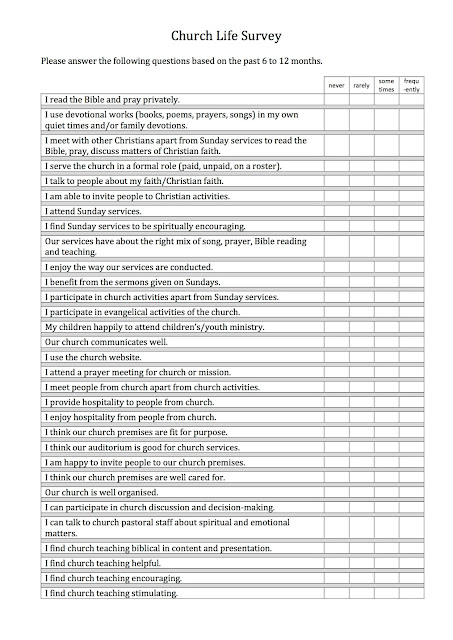 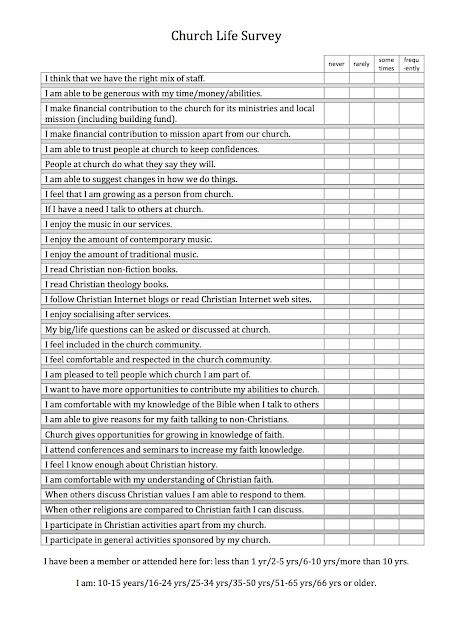 I read in an article that most young adults leave church not because of emotional or social forces (like they've been hurt, or even abused), but because their intellectual questions were not taken seriously or even answered...'just believe' still operates.

The great and frustrating irony in this is that modern rationality has its roots in Christian theology which from the start was a rational enterprise; God's creating was orderly, we in his image are to look after it. This includes coming to understand it. No 'spirits' to appease, no monsters to be scared of, no incantations to be learnt.

So, I wonder about both the education of people newly Christian, and the teaching of children in Sunday School and youth groups. I worry that its all Bible stories or affective responses to portions of biblical text. It should include Christian foundations, church history, the inputs to theology, at least.

I reflect on my own Sunday School years and while there were some teachers who responded to the questions of we young teenagers, mostly it was a kiddie entertainment routine.

At every age we need to equip children to think about their faith and to reason through questions it brings up.
No comments:

My children are caught between being leaving behind the Sunday School age and not yet in the' youth group' age. In an effort to find an alternative we went to the evening service.

The attendance was OK, but mainly 20s to 30s, a very few older middle aged and one child in the group of my children.

We missed the mark! Too old for them (I should not have been surprised).

I also found the visual atmosphere unpleasant: not enough light. It struck me as a space that grew darker when the lights were switched on.

A little while ago I posted on evaluation of the Revive15 conference.

The same should apply to church life.

A successful evaluation has got to get past the 'did you like it' questions and seek information about changes, outcomes, opportunities; about community, growth...
No comments:

Having looked over the 'good books' lists, I've planned (highly aspirationally, as the title of the post declares) to read the following. The A list is serious intent, the B list less so.

That should keep me going for a few years, but if I want a break:

Then I'll do something else...

Let's pray about this...

We've conducted our first prayer meeting. It was about 'social justice'. Well, that's fine, but it is also highly political. For some at our church, social justice means that the government should let all comers into our country by whatever means, and house them in the community.

This is not the job of government. In fact, our government has closed the corrupt and dangerous channel of boating across the ocean, which has lead to many deaths, many economic refugees, and an intake of criminals. Such arrivals also often destroy their papers to avoid their identity and origin being checked: not a good sign.

My very unpopular view is that the government  has done the right thing in closing a channel that was so unreliable for all concerned...except the smugglers, of course.

Worth noting that in the last 10 years we have taken in over 66,000 refuges: proper refugees, not criminals, thugs or thieves.

How should we help then: by helping the poor become productive, by encouraging governments to be uncorrupt. It took the west centuries to achieve this, and it was largely the influence of Christianity that achieved it...the answer is, then: missionaries.
No comments:

The Guidance of Bullets

During my Internet peregrinations (name of a radio program I co-announced on 2SER-FM many years ago, incidentally and part of the first on-air team), I came across an article from the English Civil War period: The wonderful work of God in the guidance of bullets by Nehemiah Wallington.

There was a bit of 'God blessed our bullets, but not theirs', but I detect that Wallington's side also seemed to prepare well with appropriate selection of ammunition.

Before I read it, I was wondering if I would read somthing similar to the belief of some Afgan tribal fighters who just fired off their (modern Western invented, designed and manufactured) AK-47s in the belief that they didn't need to aim as Allah would guide the bullets. Good for them?

Happily not, although there is that tendency in Puritanism.

The tendency forgets a number of things: God created us in his image; therefore we have mind and will, and both are for use, or we insult our creator. God also issued to Adam the 'creation mandate' to subdue (have stewardship over -- it always tickles me that fish are first mentioned in the list in Genesis 1:28) the creation.

God also created us for fellowship, so we do both (think for ourselves and live in the creation) in company with him who also works all things together for our good.

'Subdue' before the fall cannot be bad, but would be congruent with the operation of will determined by love as governed the creation itself.
No comments:

I started listing out my 12 best Christian books a little while ago, then thought to see what Mr Google had on the topic.

Lots, as it happens.

All the lists I saw included books I would exit from such lists: too popular (ephemeral or circumstantial), too narrow, as in protestants excluding great RC books,  or too catholic, including books that waste paper.

I was pleased, though, that I've read a number of the books listed, and even a number of my list of 7 appeared on the lists that the clever people had compiled.

Here are some that I found:

10 books for a deeper faith

25 Christian classics from the Huffington Post (of all places)

10 books that every Christian should read (too many light weights)

The Revive15 conference program was unbalanced in respect of its timing. 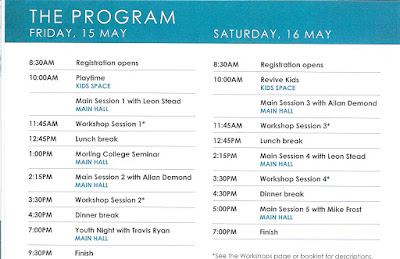 A better format in my view is below. 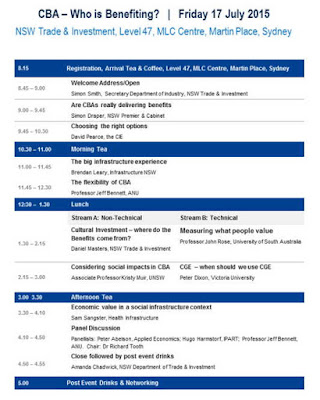