Its a great idea and a good book, setting out the 'meta' theological contours of Christian faith. As such it represents a superb approach for teaching the faith to new-comers, establishing a program for Christian young people, and for summarizing it for an enquirer.

The language is in 'story' mode, making it quite inviting to read for most, I would think. The flavours of C. S. Lewis and Francis Schaeffer (who with his wife Edith founded L'Abri) come through, which enriches it immensely. In fact, both these authors would be a happy follow-on from SoR.

I spotted three big let-downs, however. Two theological, and one more pastoral.

The two theological let-downs are considerable.

First, the creation is placed 'out of touch'. Koukl relegates this to the timelessness of fairy tales, and makes room for the delusions of materialists that, given enough time, well, just about anything is possible.

Genesis 1-3 and beyond to the chrono-genealogies, controverts both these notions.

The very point of creation both fast and recent is to prevent the dual pagan deceits of fairy tale time (ethereal and not of our time or place), and the possibility of materialism.

Vague time puts Genesis in a time-space place that is dis-continuous with our time-space experience, disconnecting it from our life-world. Genesis 1 sets the creation in the terms of our life-world experience. How its made is how it is. Its 'ontology' to use a philosophical concept, is continuous with ours and thus the place God formed for our fellowship with him is the world that he created by his word. He is close and engaged. Not far off and detached. It is this very word-caused-materiality of the creation that makes salvation by means reflective of our life-world essential.

Allowing materialism's random processes to step in at a formative level ejects wisdom, intention and care from the creation and reduces it to a meaningless cacophony of clashing atoms, where the personal is a result of matter, and not matter the result of the personal (God).

The second is unsurprising.

Koukl's underlying Calvinism and its Western theological roots shines through with its Penal Substitutionary obsessions in the chapters on Yeshua's death and suffering.

Certainly Jesus died for (as a result of) our sin, but he did not in reality (although metaphorically did) 'take' our sin upon himself, like a rucksack of perdition. He took it on because he subjected himself, as the man he was, to the 'life-world' of broken-ness and sin that resulted from man's rejection of fellowship with (and life from) God in Adam and Eve's act to repudiation of fellowship. They voted for the creature, not the creator, and thus our result!

Christ took our path to death, a certain death demonstrated certainly (and not just claimed: God always demonstrates, he doesn't make empty claims: the creation, the Exodus--both set forth as the basis for his worship--the signs Yeshua did (miracles) in his incarnation to underscore his teaching, in overturning our deathly disaster and bringing his kingdom of life as the foretaste of the new creation) and the new life demonstrated with equal tangible drama in the resurrection.

The whole point is the resurrection. On its basis we turn to Christ, repent and are blessed with the gift of  new life by the indwelling Spirit of Christ. From then on, our continuing sin is covered by Christ's death and resurrection. He 'out-died' death, then out-livened' in in resurrection.

The third deficiency is perhaps more one of style, but there is substance there too.

Koukl talks of 'heaven' continuously, even in terms of the new creation. He could have emphasised that our destiny is not a cloud-based,  harp-obsessed life of spirits, but the New Heaven and the New Earth. God's kingdom of spiritual-physical bodies as is the risen Christ's.

He then talks about the great re-union with past saints (and those who we knew in life); and truly, this would be a wonderful thing. One only hopes that our ex-girl/boy friends will not bring to mind the solecisms of our then past life.

But what he doesn't discuss is the main game: we will endlessly be in unalloyed fellowship with our Lord and creator. We will keep knowing him more and more deeply, wonderfully, thrillingly, and satisfyingly FOR EVER.

Alpha questions in the Guardian

In a couple of old Guardian articles (the newspaper, the leftist rag from the UK) from 2000, Jon Ronson reports his participation in an Alpha course at Holy Trinity Brompton, the founder of Alpha, Nicki Gumbel's parish.

Ronson mentions "If there's a God, why is there so much suffering?" and reports Gumbel's pamphlet in reply: Why Does God Allow Suffering? (answer: nobody really knows)

So much to say about this.

These are just 'dimensioning' questions. If the person is even a vague theist, they will have a conception of God which is in some contrast to their idea of a world that includes suffering; even if they are an atheist and ask as a challenge to the integrity of the Christian world-view, they will pre-suppose a definition of God to make the challenge.

Most such definitions will define the 'god' of moralistic therapeutic deism and will leave out the Biblical information about God: he is holy, eternal, and holds out to us who he made in his 'image', the blessing of eternal life with him.

Why is there so much suffering? We live in a world of God-rejection. We reject God and seek to cut ourselves off from his life-giving love. God is only interested in a relationship that meets him and he has acted to open that to us who are in 'anti-god'. Outside that relationship, we live the experience of 'anti-god'. If we didn't there would be no indication that eternity without God awaits we who persist in lauding our anti-god lives and their idolatrous obsessions. Suffering is the foretaste of the eternal meaning of rejecting God and a reminder to us of our frailty and need for God.

And 'suffering'? The apostle Paul tells us that by comparison, we have before us an 'eternal weight of glory' the content of which has not even entered our minds.
No comments:

You've probably heard this banality quite a few times. There is even a children's song with lyrics including lines such as:

Like all analogies of biblical matters, this is...as I wrote above...banal.

It puts God in the same category as a parking attendant and completely exhausts the magnificence of God's creation of people-in-his-image, reflecting his glory into the creation and being his people: a relationship of love. John 3:16 is not '"or God was so in charge of the world...".

"The highest heavens belong to the Lord,
but the earth he has given to mankind."

In terms of Genesis, given to mankind to care for as the place where God and man are in fellowship.

Greg Koukl's book The Story of Reality goes full bore on this arid and inaccurate theology, bourne on his, I'm guessing, equally arid Calvinistic theology. It mars an otherwise very helpful book. I would that someone had given it to me when I was young. Nevertheless, my tip: don't go to stoic lawyers for theology.

The quip that Koukl goes to town with demeans God and his intention in making us -- for a relationship with him. See Genesis 3:8 for the contra-positive example.

Rather, God is our heavenly father (see Matthew 12:50, and particularly Matthew 6:9...It is not 'our parking attendant in heaven...') who has made us to enjoy him forever. He seeks our relationship, for our good. He rescues us from our state of being in rejection of him and the peril of our rebellion against his love. We have chosen death and 'not-God' in everything we do, yet he seeks us to repent of this rejection and its consequent idolatry, pride and the sin that comes from these to embrace life in the regeneration of his Spirit through Christ, who conquered death and was the first resurrected in the kingdom of peace.

Going around saying that God is in charge, or God is the boss, is abhorrent. He is our father in heaven who will always achieve his ends.
No comments:

Much is written on Genesis 1 with the trivial banality that 'it is not a science text'. Yes, we know that! It is history; the foundational history of God's creation of the setting of the concourse of creature-in-his-image and him.

Here's my diagram as to how it works, with a 'modern' conceptualization of what the 'ordinary observer' descriptions might indicate. 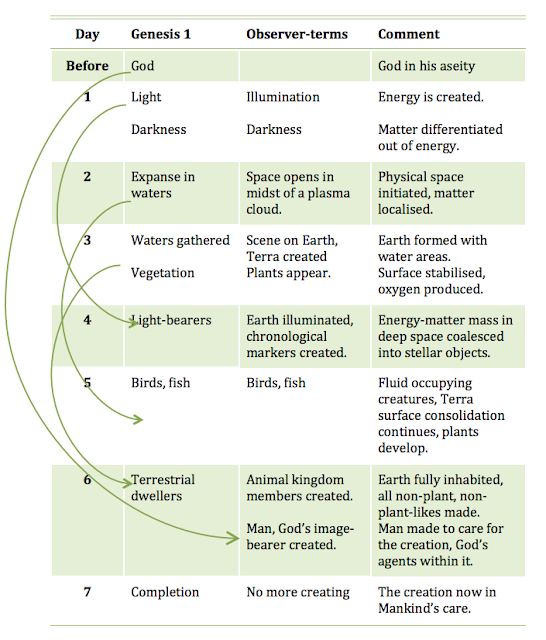 The sequence is 'book-ended' with God at the start and God's image-bearer at the end. In between a trio of consequential cascades.

It is concluded with God's 'rest' from creating, meaning he has finished creating, and now over to the image-bearer to care for, use, enjoy the creation and in it grow in fellowship with the maker.

The importance of this comes clear in Exodus 31:12-17. A passage that follows the 'skilled craftsman passage about making the items marking God with his people, emphasized by Man sharing God's rest: being with him enjoying the completed creation. Thus the seriousness of breaking the Sabbath: if you don't want to enjoy God, so be it.
No comments:

Many conspicuous Christians wreck their work with stupid jokes about women.

The most recent I've come across is Dallas Willard! I know he's dead now, but in his otherwise thoughtful lecture on Salvation and what it is not, he bloops with a dumb joke about wives.

I didn't marry my wife so I would have someone to blame for my misfortunes if I couldn't blame the government, I married her because she is my soul-mate.

Ponder on Colossians 3:12. Go look it up yourself.
No comments:

Email ThisBlogThis!Share to TwitterShare to FacebookShare to Pinterest
Labels: Discipleship

Always fun talking to an atheist and helping them to see the internal incoherence of their position.

Greg Koukl has some tips here for the encounter.

You might also want to look at his previous article on the topic.
No comments:

Email ThisBlogThis!Share to TwitterShare to FacebookShare to Pinterest
Labels: Apologetics

Diligent readers will recall that my plan included reading Psalms of a morning.

One's not enough. I now read two a morning...or a day with the occasional non-morning dip into the book.

So that means 75 days to read the whole collection. Twice a year means 150 days for Psalms.

I don't want to overdo it on Psalms, so I have to add other books.

Proverbs...Lamentations...Song? No, I find Song a little cloying (can I say that?). Job? Ecclesiastes?

Still room for another round of Psalms.

Maybe I've got to slow down on the Psalms.

Let's see, 1 a day...about 5 months worth (and worth is a good word here), Proverbs and Lam/Eccles for two months, then back to Psalms.
No comments: