Our songs for our church meetings are projected on to a screen at the front of the auditorium.

For some inexplicable reason, the pronoun 'you' is capitalised when it refers to God. Odd.
No comments:

Email ThisBlogThis!Share to TwitterShare to FacebookShare to Pinterest
Labels: Teaching

Up the front of the auditorium that our church meets in (some people call the space 'the church') this greets the viewer:

From left to right:
Then across the stage:
and to the right:
But the visual dishevelment starts prior:

When one walks into the auditorium, one is faced with the large two-person audio-visual control desk. About one quarter of the congregation look into the very technical display.

Contrast this with the church auditorium below 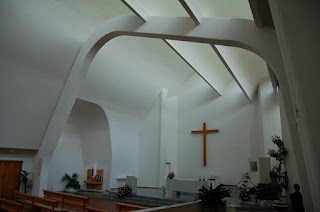 Dignity and visual charm are not misplaced in our meeting spaces but are part of the building up of the community.
No comments:

I wonder what we teach young Christians.

A relative of mine is attending a selective high school; they all work hard there. Some kids are working 2 years ahead of their age. But when it comes to the 'Scripture' program its mind in the bin time.

There's a place for the more affective sessions with an adult Christian talking about the praxis of faith for adolescents, but there is also room for real intellectual work. I wonder if there is a curriculum for that, so that when bright Christian children leave high school they have a reasonable understanding of the Bible, basic theology, church history and history of theology and apologetics...I wonder.
No comments:

My comments on Grudem's non-theology of creation led me to some Google probing of the question of origins.

I found some interesting posts on the theological approach to language that show, to my mind, an interesting 'retrojection' of a modern myth of convenience into an ancient text. An example.

The point of departure is the view of some (Seely, for example) that the 'firmament' in Genesis 1 was regarded by the ancients as a solid dome. Both Noel Weeks (in a WTJ article which is not linkable..BTW I heard Noel speak at a house party/conference at Oak Flats Anglican Church about 35 years ago; its pleasing to see he's still writing) and Gleeson Archer demolish this. What interests me, though is the exegesis of raqia according to a view that was held, without substantiation, of how ancient pagan cosmology must have been, and the 'accommodation' of God in his revelation of that pagan idea.

Its wrong from the get go; its wrong of God, the logic is wrong, and the conclusion thus shaky...and this is how paid theologians work? I'd be out of a job if I took that approach to my profession!

My final current challenge to add to my theological library is a set of books by Pannenberg.

His Systematic Theology
Jesus God and Man
Towards a Theology of Nature (that gives it away: the idea of 'nature' is not in any way Christian)
Basic Questions in Theology v. 1 and v. 2 (I read v. 1 at L'Abri)
Apostles Creed
Theology and the Kingdom of God
Theology and the Philosophy of Science
Faith and Reality.

Saving up...Amazon has some quite cheaply, but its the postage that kills me, exchange rate wise.
No comments:

Prior to purchasing Tom Schreiner's NT theology, (his web page) I read a couple of reviews.

Here's my review of the reviews:

In the U.S. they seem to like to pump up titles, and thus rendering them meaningless (that's why everyone is a 'leader', even in church circles). Hansen is entitled 'editor at large'. Now, in my understanding, an editor is one who has control over the content and style of a publication. The final authority for what gets printed. How does one have an 'editor at large'. Do they mean instead 'occasional contributor'?

2. Andy Naselli, on The Gospel Coalition.

A great relief to discover that Schreiner is perhaps (maybe, despite more recent contrary indicators) 'amellennialist' and NOT dispensationalist. Whew.
No comments: