I browsed to Think Theology this morning and came across a post on Tyndale. It reminded me of my post on Coverdale.

Irritatingly TT is built in such a way that there is no permalink to a post...so I can't link to it; but here's a screen shot.

I was with family on Christmas day, as is proper; my wife's aunt related an incident, when her great grandchildren were looking at the sky at sunset after a particularly violent storm. It looked like a painting, she said. The children asked "Who painted it?" She replied (she is not a practicing Christian, or even overtly 'religious', as far as I know) "God."

As she related this to me, she told me that one of them replied "Who is God?". She told me in not so many words that she couldn't answer, but marveled at the thoughtfulness of the child.

How is it that the Church has not been able to convey God's self-identity to the world at large, even in a country with a Christian heritage?

The answer, of course, is that he is the one who made everything, and gave it to us to enjoy and to look after; in which jobs we have failed miserably. But he still loves us.

Some of my Anglican evangelical friends would have diverted to "Two Ways To Live" a proclamatory approach that has nothing to do with Paul's and is about as dreadful as "Four Spiritual Laws" for disengaged insurance sales.
No comments:

I picked up an old copy of In the Black today, and browsed past the interesting article on fleet sales in 2012 to Eva Tsahuridu's Practical Wisdom, which started with this gem on women: 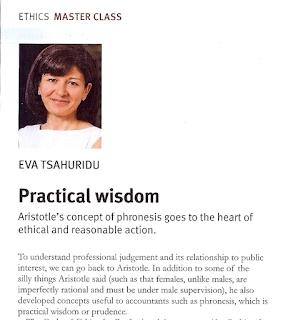 I had to wonder if the resistance of some conservative Christians to women taking on full participation in the life of the church, as was the practice in NT times (I think of Paul's references to his female co-workers) derives from Aristotle's philosophy embedded as it was in RC theological roots.

If so, how interesting that a theological point relies upon the views of a pagan thinker who is detached both from the revelation of God and his indwelling spirit!
No comments:

Recently some US public Christians have claimed that Jehovah and Allah are the same person (God). Al Mohler has refuted this on his blog. A similar view at Reformation21.

There is more to say, however.

God is love in the Bible. In Islam God is despotic and calls for the death of the 'unbeliever' not his redemption.

[The acts against those who would oppose Israel in the promised land are not relevant, as the point is not unbelief per se, but untrammeled evil: consider the references to Moloch and Sodom].


Philosphically Islam's monotonic deity necessitates the world being framed in a rigid unity that is internally referent and intolerant of diversity; indeed, for which diversity is abhorrent. Thus Islam. The triune God within himself shows unity and fellowship in diversity; whence love.

The only way to certainty of salvation in Islam is martyrdom. In Christ it is faith!
No comments:

Email ThisBlogThis!Share to TwitterShare to FacebookShare to Pinterest
Labels: Mission

Our church doesn't have Bible Study groups. We have discipleship groups. At those groups we...study the Bible.

The plan is to do more. I wonder what. As one of the organisers, I put my thinking cap on, but something that comes instantly to mind is the need for Christians to think more.

A start for this I would love to see is a weekend retreat, once a year, encouraging every Christian, but particularly new Christians or younger Christians (that is early 20s) to attend; at least once.

The weekend would work through Schaeffer's trilogy: The God Who is There, Escape from Reason and He is There and He is Not Silent. No better starting point for thinking about Christian faith and our message to the world.
No comments:

As Solomon points out, the trouble with books is that there is no end to them.

So it is with New Testament theologies, introductions and commentaries. I've collected a few over the years, many are good reads. Dipping into the past I'm reading Leon Morris's at the moment.

Next buy is probably going to be Eugene Boring's NT intro and his 'People's' commentary.

I'm pleased that Boring has posted some videos of lectures on the topic. Would that others would follow suit.