There's something peculiar about language used in my experience of Baptist churches, including the one I am a part of.

I'm used to being offended by the un-Christian ideas of 'accountability' and 'challenge' (except where warranted, such as a worker is accountable to the board of the congregation). The create an irksome mis-image of Christian faith.

Today, another. Our bright young speaker in his sermon, mentioning Wimber of Vineyard fame, saying that faith was spelt R...I...S...K. This is close to the habit of The Rant, and borders on being legalistic. In the Bible, faith is spelt: Love, Peace, Joy.

Steve, the speaker, also reminded us of the Asuza Street 'revivial' leading to a 600m strong Pentacostal expansion over the past 100 years of so. I just wonder how many of that number is growth by transfer from non-Pentacostal churches; such was the predominant trend in Pentacostal circles that touched me in decades past. I also wonder about the 'revival' itself, having observed the Rodney Howard Browne debacle of the early 90s.

BTW, an interesting blog on Azusa Street.
No comments:

Email ThisBlogThis!Share to TwitterShare to FacebookShare to Pinterest
Labels: Ministry

One of my children was at his first youth group house party recently. Wife and I discussed a concern that he is given sufficent intellectual bones for his faith to grow.

The point of concern emerged between us: I had a non-conformist Christian heritage, my wife and Anglican one. My wife extolled the 'intellectual bones' of an Anglican upbringing in the structured thought life that comes from the prayer book, the creeds and the 39 Articles, mediated by the confirmation process: a short period of active and focussed education for young teenagers.

I spent last evening perusing the 39 Articles in the Book of Common Prayer and the Australian Anglican Prayer Book, both of which are very familiar to our family. I plan to use AAPB in my children's education in the faith.

During my prowl of websites, I came to one on the Articles, one on the Homilies, and a wonderful sermon from a church in Texas.
No comments:

A copy of our church planning survey for your delectation. 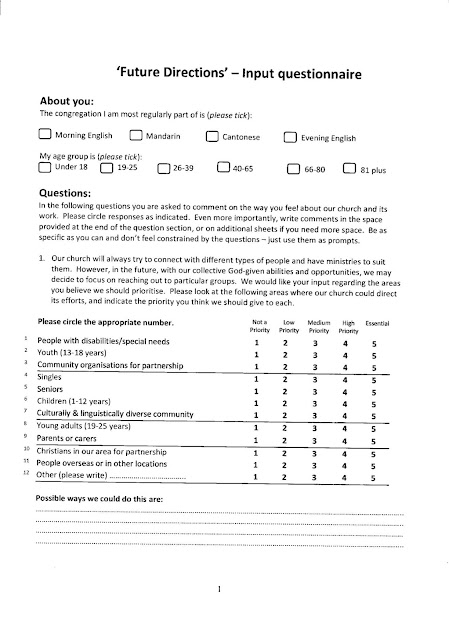 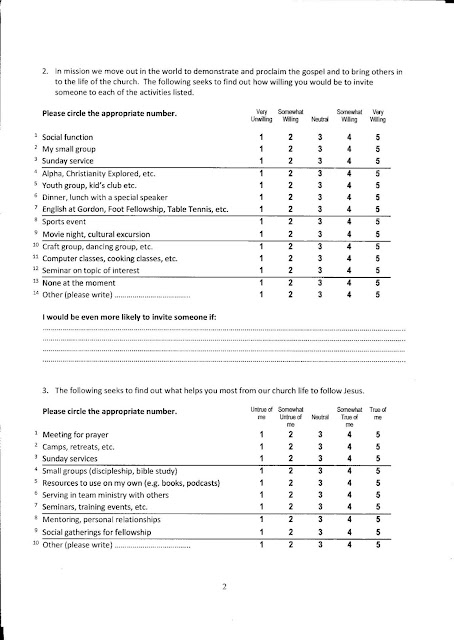 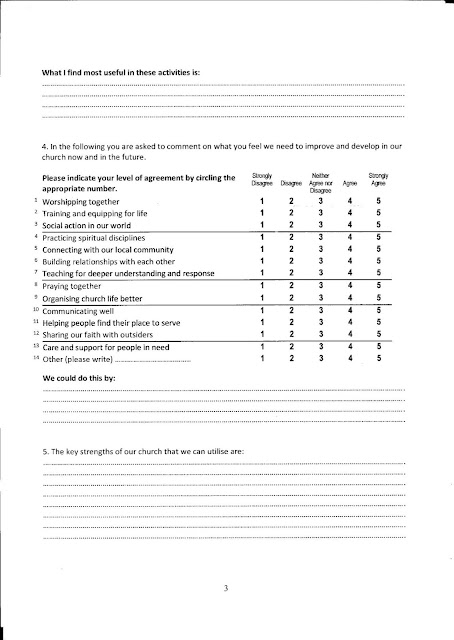 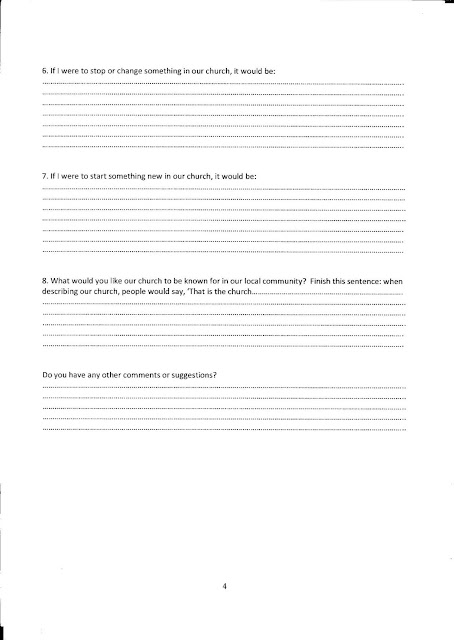 Our benediction this morning was based on, I think it was Psalm 21; could be wrong.

It reminded me of Lincoln's Gettysburg address in modern form.

Because the benediction, for us all to say, a 'good thing,' was IN BULLET POINTS!

Next it will be the Apostle's creed in bullet points.
No comments:

Email ThisBlogThis!Share to TwitterShare to FacebookShare to Pinterest
Labels: Congregation

In Charles Moore's column in The Spectator for 2 April 2016 he mentioned that the longest-serving broadcaster in history is....The Queen!

Her first broadcast was on Children's Hour, 13 October 1940. She said:

'God will care for us, and give us victory and peace'

Beautiful words from a, then, young woman.

Now I'm not particularly 'into' Queens, but on the other hand I'm worried by any republic that is not as understated as the Swiss system. One commentator mentioned that in republics the wealthy rise to the top: we thus head for tyrrany by a more modern route.

Along the lines of Mitchum's Poland, the idea of a non-resident monarch is great: they are easier to dislodge should they cease to perform as required.

And thus, I think, the jingoistic misunderstanding of what a constitutional monarch is; particularly ours, whose power and role have been circumscribed by long struggles in England for religious freedom and political balance.  This we now have...briefly (an historical rarity, I might add).
No comments:

Email ThisBlogThis!Share to TwitterShare to FacebookShare to Pinterest
Labels: Society

A wonderful quote from Siedentop's Inventing the Individual, The Origins of Western Liberalism:


What is the crux of secularism? It is that belief in an underlying or moral equality of humans implies that there is a sphere in which each should be free to make his or her own decisions, a sphere of conscience and free action. that belief is summarised in the central value of classical liberalism: the commitment to ‘equal liberty’. Is this indifference or non-belief? Not at all. It rests on the firm belief that to be human means being a rational and moral agent, a free chooser with responsibility for one’s actions. It puts a premium on conscience rather than the ‘blind’ following of rules. It joins rights with duties to others.


This is also the central egalitarian moral insight of Christianity.

The great socio-political gift of Christianity to the world.
No comments:

the trouble with discipleship

At our church we have 'discipleship' groups...that's like a married couple meeting every week for 'marriage time'. What I mean is everything in church life is inevitably about discipleship; the variable is that it could be good, bad, or in the middle.

I ran into Frank Viola's book on discipleship: Discipleship in crisis -- 9 reasons why discipleship is not working. (I love the way we must have explanatory sub-titles these days; I could imagine Plato releasing The Republic: how philosphers should rule the world).

I sent the book to a friend at church and read it myself. I should have read first, then sent nowhere. Viola is heavily culture bound: bound by a culture in a part of the US I hope that I never visit! The book poses questions that are answered in linked MP3 files, talks Viola has given.

After a few minutes into the first talk I had to abandon it; I was getting the rant! I expected a well structured, logical and finely argued disquisition, but instead I got the rant. The Rant is something that cult leaders do because they have no logic. It is closely related to the Finney harrange, that was de rigueur in the 1960s and 70s in Australia...probably in the US too, given its Finney herritage. The basic tactic was to harrangue people into the Kingdom. It basically (a) didn't work and (b) repelled people. Many of my fellow harrangued from my youth have eschewed faith communities in their adulthood.

The Rant is similar to The  Harrange in its emotiveness, legalism (laying 'shoulds' on the audience), and affective manipulation. In fact, the latter is the essence of The Rant. Avoid it.

Compare The Rant to this talk by Boring (an unfortunate name for a Christian teacher). His style treats his hearers like adult fellow Christians and presumes spirituality.

As I've posted before, last years Revive conference was destroyed for me by The Harrangue. Viola's work has been destroyed by The Rant.

While I'm on Revive, at Revive 16, The Rant is on the cards with a famous Baptist Social Christian being on the platform.
No comments:

I'm loathe to raise an issue of fervid preoccupation of some, but I saw a pair of letters in a recent Weekend Australian that dealt with the issue nicely. 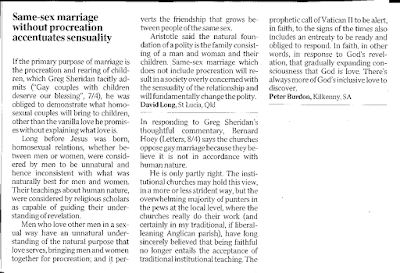 The first letter aligns with my view: without trying to be crude; marriage is about sex; sex, at least in princple, leads to procreation. If procreation is not possible, then it is not 'sex' but something else. 'Para-sex', maybe. But, with Long's letter, cut off from procreation, from bringing new life, we merely have a centripetal spiral of self indulgence: a narcisistic implosion: it is not about 'love' as concieved by the author of love, but about self, because it cannot produce life.

The second author, Burdon, misses the point entirely and has reduced 'love' to its hijacking by Hollywood fluff. We get nowhere, and certainly cannot 'hijack' God's revelation to bolster the implosive selfishness.
No comments:

One of the rare perfect holiday mornings: sitting on the deck with my son; he reading Lewis' Surprised by Joy, me reading Ladd's NT Theology. Can't get better.
No comments:

Email ThisBlogThis!Share to TwitterShare to FacebookShare to Pinterest
Labels: Discipleship

In a recent e-mail from Frank Viola, part of his 'unfiltered' series, he talked about Christians and making connections. He made the point that Christians, unlike people 'in the world' seem to avoid making connections with relevant other Christians; for example, do Christian particle physicists meet to discuss their field as being Christians, and refine each other's thinking and practice? Frank's point is that they typically don't.

On the plus side, I was once in a group of Christians where we all had the same profession; we met, discussed, helped the junior members with their professional exams, and swapped professional practice ideas; was good.

Frank talks about setting such confrere groups, he calls them 'mastermind' groups; I'll think about same in my own field and place...could be good.
No comments:

The film 'Superman v Batman' has just started screening, and a wonderful extravaganza of the stunt man's art it is; but it is also a wonderful extravaganza for the uncooked philosopher of religion. Lex Lothar spouts the line: "if God is good he cannot be all-powerful, and if he is all-powerful, he cannot be good". The sub-theme of the film is 'good' in a non-theistic world; the treatment is incoherently centripetal, of course.

Leaving aside the moral epistemological connundrum that this claim entails, and also the begging of the question that we are dealing with Plato's 'god' and not the Creator-God of the Bible (who besides gets quite a lot of air time in the film), it gives to the half-smart village intellectual ammuntion for water cooler conversations that would side-line most Christians.

Could any member of your church/youth group/Bible study deal with the question? Has anyone even heard of John Hick (not that he has the last word on the matter), or Augustine's theodicy, or more modern renditions? Of course not.

So, what do you teach people at your church?

I'd be pretty sure that what you do teach could not take them out of a materialist metaphysic to open the gospel to an unbeliever!
No comments:

A relation of mine has just experienced a horrible episode of family disharmony, and has evil done to both her reputation and good intentions by others who seem to have no idea of what they have done to her; that's my 'looking on the bright side' habit at work. My relation sees on the dark side, understandably.

She had the unfortunate experience of confiding in a couple of people at church who blythly advised that she 'just forget them' and to 'forgive'.

After you've been torn apart emotionally you do not 'just forget'. Your life has changed, and it will never unchange. Entire relationships with all their history are binned!

I wonder why some people feel that they have to give advice? Perhaps they mean well, but with a shallow understanding of circumstances advice is neither warranted nor called for. And its probably not wanted anyway. What is wanted is a sympathetic ear, care and quiet concern that is genuine and heartfelt. Even offering to pray (non-judgementally) is worthwhile.

And, forgive! I think the Bible shows us that foregiveness is contingent on repentance. Sure, we are to love our enemies, but I don't know that that entails forgiving them when they deny a relationship of repent-forgive.
No comments: