I think the basic opportunity that Grudem has missed is to use the concrete-ness of creation in Genesis 1-3 to rebut the idealism that underpins much contemporary theology. A concrete creation consists of events that have a real-world time-space continuity with the events that we experience. The creation events are delimited in existential terms that are consistent with the terms by which we delimit events and causality in our everyday lives.

One of the chief de-limiters, of course, is timing. The passage goes to great length to define the chronological parameters: parameters that govern our understanding of cause, effect, and event relationships in uniform space-time, providing for their use in interpreting history and thus our being, our perception of our existence and the shared context of our communal relations. These extend not only ‘laterally’ with each other today, but ‘historically’ with those before us and in prospect of those to come, and ‘vertically’; our community with God and its disruption in sin.

When something happens controls it some way what it means to me, my decision and belief process and my apprehension of the basic historic dependence in concrete terms.

If we disperse the timing and time of creation into symbolism, then the connection with the real world and its salience for us and our relationship to God evaporates. This reduces the existential event-density making room for, indeed inviting, a range of responses that are outside relationship with God: these range from materialism (and its evolutionary speculations), mysticism (and philosophical idealism) -- exemplified in the modern western ‘new age’ movement and the demonic: asserted in all man-made religions!
No comments:

Many years ago, after reading quite a number of Christian paperbacks and short books, I decided that my time would be better spent reading more enriching serious Christian literature. I read Calvin's Institutes. My effort was repaid, and while I didn't always follow where Calvin lead, there remained a depth that was encouraging, thought provoking and stimulating of growth.

I have recently opened up a not heavily serious book: Grudem's Systematic Theology, but it is a very solid and well constructed one.

The chapter on prayer was short for the topic, but one of the most useful pieces I've read on prayer. Plenty to ponder upon, and much to encourage. It changed me!

Some people disdain the project of systematic theology in lieu of biblical theology. Both are necessary; systematics develop from the data in the Bible a conspectus of a topic and bring a way of reading the Bible to build understanding of what is taught about a theme. Highly useful, in my view.

I'm looking forward to completing my reading of Grudem and moving on through a few more modern one-volume systematics, before tackling a few multi-volume endeavours. I'm particularly looking forward to Kelly, Jenson, Bavinck and Pannenberg (I just await a low cost set of Pannenberg...tres pricey even at Better World Books).
No comments:

Recently a member of our small group  ministry team left our church. The reason he confided in the senior minister was that women taught in our church services!

He apparently took a fundamentalist line on 1 Timothy 2:12. That is, he took the words at face value of their contemporary English meaning and without considered reference to the rest of the Bible, the practice of the apostles, the particular context that Paul was dealing with and the word he used.

The word translated 'authority' occurs only once in the New Testament, and should be handled with care.

The starting point for our understanding of relations between the sexes has to be the creation account in Genesis 1-2 and 3. This portrays us without ontological differentiation, and the discourse between Adam and Eve shows uniform initiating. The word used of Eve as 'helper' describes the action of one more capable on behalf of one in need. The need Adam had is a big need: an existential need; I would like to hazard the guess that it is a need for community like the community (unity) of the trinity.

The NT passages that are used to attribute 'role' differentiation between men and women are nonsensical if they are given an ontological reference rather than being understood as the circumstantial responses that they clearly are. There is also rather too much reading of older common social mores into the teaching of the Holy Spirit in the Bible in this topic.

Moreover the rule imposition that is evoked here is more Pharisaical than Christian. The rules seem to arbitrarily constrain an ontological and charismatic capability. That is women can actually teach: I've heard them. No one in the church actually has misapplied 'authority' over any other (that is, Paul was not implying male authority, but decrying some women taking a particular authoritarian spin in their teaching), each of us is to be submissive to the other, irrespective of sex.

This is easy to see in reality. Should my male friend who dipped out of high school, has an IQ of 100 and the emotional insight of a fence post 'lead' my female friend who has had a life as a 'prayer warrior', knows the Bible thoroughly and devotionally, has advanced degrees in theology and sacrificed for the gospel for decades, building up the church where ever she was?

Amusing plaque at the Adventist Hospital at Wahroonga. 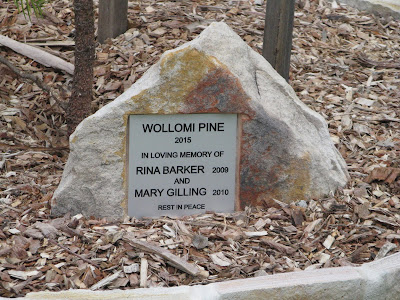 "Rest in peace" is a Roman Catholic blessing against the prospect of the dead soul being in purgatory! I didn't know that SDAs had a similar belief!