Atheism is too simple.

Chris Mitchell, in his reflections on C. S. Lewis' Mere Christianity, Lecture 2: Christian Belief Part 1, mentioned that Lewis' criticism of Atheism was that it is 'too simple'.

An excellent summary of atheism's view that all of our life and experience and the cosmos we are in 'just is'. And that's it.

The human condition, the greatness of the human soul, and its great failings. Well, they just are. That is. The earthworm view of life, to borrow Ellis Potter's term about people 'who don't know much about art, but they know what they like.'

The deficit view of evangelism

Many churches seem to mistake their mission for social service to the community at large, rather than  proclamation of the gospel.

Most denominations do undertake the complex, demanding and high skill work of some form of social service. However, these days, such endeavours have become co-opted by governments through grants, behaviour requirements and open recruitment for staffing.

This has had perverse outcomes. I've encountered Anglican 'charities' with service outlets (homes for adolescents) staffed by self proclaimed witches, and a Roman Catholic charity, with a similar clientele staffed by people who parade their sexual appetites (outside of marriage of course, where one doesn't need to 'parade' such), and blithely support a 16 year old drug addict to finance her habit through prostitution.

These are clearly of no charitable or evangelistic or even social benefit at all.

If we do 'social' work, it should have two arms: pure charities that do Christian work with a Christian ethos, and support for church members who fall into need.

Paul's collection for the church in Jerusalem was not for the Emperor worshipers. It was for his fellow Christians.

So we come to the local church.

I see so many running a deficit view of evangelism. Out to repair peoples' failings, limitations or socially defined 'needs' in the slender hope that they'll become church members.

Futile, on the numbers.

We need to equip the church to do evangelism at the grass roots. Every Christian needs to know and be able to explain what they believe and why, and to engage others in conversations in the knowledge of the 5 basic apologetic topics:

They should also have a basic grasp of how to discuss with Jehovah's Witnesses, Mormons, modern (western) pagans, Muslims and Eastern pagans (Hindus and Buddhists).
No comments:

Just what is a real church to do?

Despite all its rhetoric about marching to the beat of a different drummer, the Christian church seems to fall into line with the popular drummer as soon as it can. Yet, the public Christians should push back at every opportunity. The CV-19 fatality numbers and the demographic/morbidity profile of fatalities tells us that the great lockup is irrelevant. This virus is mainly harmless!

We are in a society where comfort, peace and wealth have given us an unwarranted fear of death!

The PM said on 15 March last year:
"the truth is that while many people will contract this virus that it’s clear, just as people get the flu each year, it is a more severe condition than the flu, but for the vast majority ... around 8 in 10 is our advice, it will be a mild illness and it will pass."

In fact, for the elderly the CFR is 0.03; for the under 60 it is 0.0008: next to nothing. Either way, the vast majority recover. On balance the government with its mad shut-downs are trampling down the natural source of well-being, with very adverse effects on the young and the aged, in our fellowship with each other.

All said, the basic point of the churches' resistance should be that people gather in communities, of whatever stripe, because we are made to socialise. We need each other, we need to mix, we need to talk to new people, It is essential! We need to meet and greet, we need to 'fellowship' in all sorts of ways at all sorts of levels.

Governments in their blind pursuit of good media coverage are striking at the heart of our humanity and this can only bring harm broadly, pervasively and unrelentingly. To children particularly, to young workers, to uni students, to casual workers, to small employers, to people who find work their main social contact. It is cruel, callous and destructive beyond belief; staggering in its one-eyed myopic view that life can be reduced to the hospital ward fantasies of the CMOs.

Comment on: https://creation.com/the-creation-hyperbola
I think there are a couple of possibilities in God's creating over six days as we experience them (very clear from the 'evening and morning' definition of 'day'). Firstly, God demonstrates that, while the eternal creator, he is present and active in the world that we live in and is created as the stage for our communion with him. God is 'here', not distant. He is in our 'space' not some ethereal unobtainable place that is incomprehensible to us (pace Plato, Aristotle and pagan stories in general). Each day shows a sequence of events that commence with God's will: with 'mind', and result in an effect, which God then evaluates. He demonstrates that mind (a person) is the source, and not things visible, as per Hebrews 11:3, and each stage of creation is complete, established to get on with life and its cycles of reproduction, ecological adjustment, and cultural development (for man). He also demonstrates a creation where rational causality operates. Finally God demonstrates that he is in fellowship with his creature-in-his-image, reinforcing the 'imageness' that is exhibited in creative work: mind applied to the creation. He adopts the same tempo that we are constrained by: the daily cycle that dominates our live. God demonstrates that he knows our limitation but nevertheless exhibit his capability. Thus he shares, fellowships, despite our finitude, making sense of the 'imageness' that allows the fellowship.
If God had created instantly, it would seem to make God one with creation: monism. If he 'created' through evolution (over long periods) it would seem to absorb him into the creation, making him included in it.Either way a creator disconnected from the creation and its creatures. We know from Genesis 3:8 that this we have a fellowshipping God, not a god like the pagans imagine, distant, impersonal, impassible.
The creation in 6 days shows God separate from the creation and its creator. He demonstrates this by describing the way he created. All of God's acts in the Bible are public, and they are all about the fellowship (or not) of man and God. The creation account is similarly public. We weren't there, so the next best thing is its description showing it was done in terms of the world that we are in. The creation account, unlike any pagan account, is clearly in and about *this* world, not some other figmentary world of which we can know nothing and cannot make sense of in our lives denominated by the passing of time, location in history and setting in place.
No comments:

Nice little book by Schwarz.  Not so little for those who don't take to reading so readily (an increasing number these days, I daresay, given the dominance of visual cultural media).

Nevertheless, if you are going to read one book as an overview of Christian faith, this is quite good. 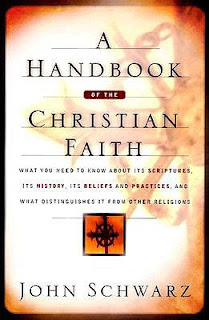 In fact, I would have treasured this as a young Christian. I was baptised at 12 years old, or maybe 11, but this was a capstone on my belief over my childhood and not due to a sudden conversion.

As it was, I was in a quite non-intellectual church of an non-intellectual denomination, so, few books in sight. The view was, 'the Bible is the only book you need'. In one way correct, but reading the books of people who've thought deeply about their faith is always worthwhile.

My one gripe with Schwarz is his seeming leaning to the the religious evolution school of thought, and his reflexive use of the term 'story' for the accounts of the Bible. Except for the writings and the letters, the works up to Esther in the Old Testament are accounts of events, as are the Gospels and Acts.

He claims that here are two creation accounts. Not so, of course. More properly, the 'creation' is Genesis 1-3. It starts with the global statement, the headline, 'In the beginning God created the heavens and the earth'. We start with the entirety of the creation. The rest of chapter 1 zooms in to the earth, the place of our habitation and fellowship with God. Chapter two enlarges on Genesis 1:27. Chapter 3 is then how this pans out (poorly) as how the creation will now play out, with some very important parts.

In chapter 3:8 we see God embarking on drawing man into fellowship. But man has rejected him. But its not all bad: the ultimate defeat of the anti-god (3:15c) and God's clothing them, protecting them, with the first death in 3:20.

He mealy-mouths his way around Genesis 1-3 as well, reducing it to a pious 'story' that, even though he seems to regard it has having no objective factual content, holds that it manages to teach something. How he knows this, I fail to grasp. He fails to make the connection between his (unwitting?) Neoplatonist treatment of the section and its real world significance.

Email ThisBlogThis!Share to TwitterShare to FacebookShare to Pinterest
Labels: Teaching

The crucible of creativity

My letter to Quadrant responding to an article by Simon Cowen

The distinction Rabbi Cowen draws between contemporary trends in the visual arts (and possibly applicable to all creative arts) and so-called ‘traditional’ views of the arts is instructive. It could go further, however, on the premiss that all art is religious. All art takes a position on the nature of reality, the nature of people, and the nature of the (dis?)continuity between the two.

The ‘modern secular’ art he decries has a religious position in broad brush strokes. Underlying it, I aver, is the most popular but sub-articulate ‘Religion of Me’. In its train, this peculiar modern version of paganism and its arid monist view of reality presents its vapid revelations as new.  They are introverted banalities at best. They tell us nothing, depleting the human spirit, rather than cheering it on to flourish.

One salient outcome of this monist vision is the suppression of true otherness. Something that is demonstrated and echoed in marriage (I reserve that term to a declared union of man and woman with the general prospect of raising a family. If the marriage does not join the sexes, it is not about the other, but, rather, the ‘same’, as a reflection in a mirror. Of itself unable to contribute family to enduring civilisation).

In the Judeo-Christian religious vision, this is demonstrated in the generous missionary spirit of much of Christianity and of Judaism. Christian mission efforts are well known. Less well acknowledged is the implicit Jewish mission of the diaspora. Jews being everywhere, contributing to all sorts of societies unstintingly, distinctively, and unremittingly. This great spirit is regrettably inverted by their heretical, effectively monist, offspring, Islam.

This religious tradition unfolds from the notion of a transcendent personal creator: mind at the source of all that we know and experience, growing from the Noahcian seed that prepares for Messiah. A creator who is radically ‘other’ but who reaches across the otherness of his transcendence for fellowship with his creation. The Genesis story of creation etches this to dramatic and striking effect.

I differ from Cowen and do not extend this notion to paganism. Its vision of ‘creator’ if there is one, is impersonal, solipsistic, and results in an inert spiral of self-absorption.
Read more »
No comments: