I had a meeting in Blue Island (a suburb of Chicago) on a Friday, arrived the day before and chose to stay at a hotel near the Loop (the 'down town' of Chicago). The company I was meeting with had booked a room for me at the Holiday Inn in Blue Island, but that location did not appeal, even though their paying for my hotel did.

Frank Lloyd Wright's homes in the Chicago area interested me and I took a few trips to visit them. On the Sunday I visited the Robie House near Chicago University. Walking to another location I passed a church at the right time and joined the service. It was a long time ago now, but my recollection is that the church called itself University Presbyterian Church. The minister was about 50, casually dressed and wore his hair in a pony tail. Cool guy.

At that church I had my first encounter with 'liturgical dance'. Happily so far it has been my only encounter.

I think this map shows the church, as it is the only one I can find that is close enough to the Robie house, but I could be mistaken. 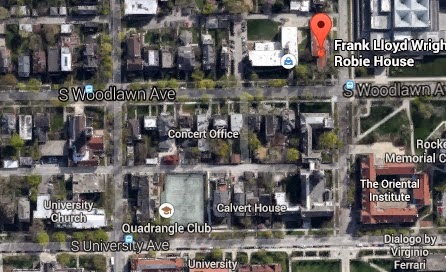