On a business trip to the US in 1977 I had a couple of meetings in Los Angeles, and timed them to spend a Sunday in the city. I tripped out to Orange County, where I had a Sunday morning 'drop-in' meeting with some colleagues, then went to the church pastored by Robert Schuller. 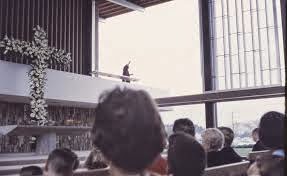 This was just before the Crystal Cathedral was built, and was a great barn of a building, true to the style of the 1960s. It was astonishingly large and I found completely impersonal.
The only part of the sermon that sticks in my mind was the bizarrely self-promoting dwelling by Schuller on a meeting he had with Jimmy Carter, the then president of the United States. It was completely out of place, unhelpful and irrelevant.

I understand that the premises has been since purchased by the RC diocese of that place.

If I go back there (which I doubt) I'd love to see the administration building, designed by one of my architect-heroes, Richard Meier. He's one of the few architects whose buildings have impressed my young children!