It's about the 'five habits of highly missional people'; an obvious knock off epigram of Covey's 7 Habits of Highly Successful People.

The 5  habits are represented by the acronym BELLS: bless, eat, listen, learn, sent.

I thought this was generally pretty good. But I got hung up on two things (aside from the rather too cool neologism 'missional').

In true Baptist fashion, its been codified and made into a rule that one is 'accountable' for (another Baptist boogy word).

Indeed, there's a table of objectives (or maybe its examples, or encouragements, but...) 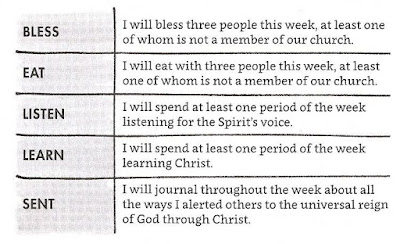 This is as much a turn off as the old fashioned button hole your friends and ask them to repent, tell them the four spiritual laws, the two ways to live....the you're not a real person to me (because we don't start with what love is in relationships). It misses out on one critical thing: as a rector of an Anglican church I used to attend said: one has to earn the right to communicate the gospel to another: be trusted be conversing on a two-way street be a real person.

Of course, there are some good ideas in this list, but it has reduced them to a mechanism which is completely unachievable for many people: eat with three people (not family) a week. Man, I couldn't do that in a year! Get real.