Now we all know what 'subdue' means

Fires rage across eastern Australia; particularly south eastern NSW and eastern Victoria, possibly the worst such fires in recent history (although Victoria's 1939 fires were very bad too). They come after a long drought, possibly a 1 in 100 year drought, and many decades of romantic environmentalism that puts 'nature' and 'wilderness' on an unwarranted, and as we now know, unwise pedestal.

The result is best expressed in this photo: 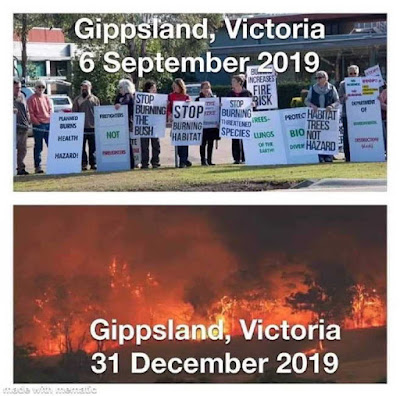 Now, at last we understand what 'subdue' means in Genesis 1:28:

God blessed them; and God said to them, “Be fruitful and multiply, and fill the earth, and subdue it; and rule over the fish of the sea and over the birds of the sky and over every living thing that moves on the earth.”

Subdue, rule, do not mean 'exploit' as some have complained, but rather it means to manage for human habitation.